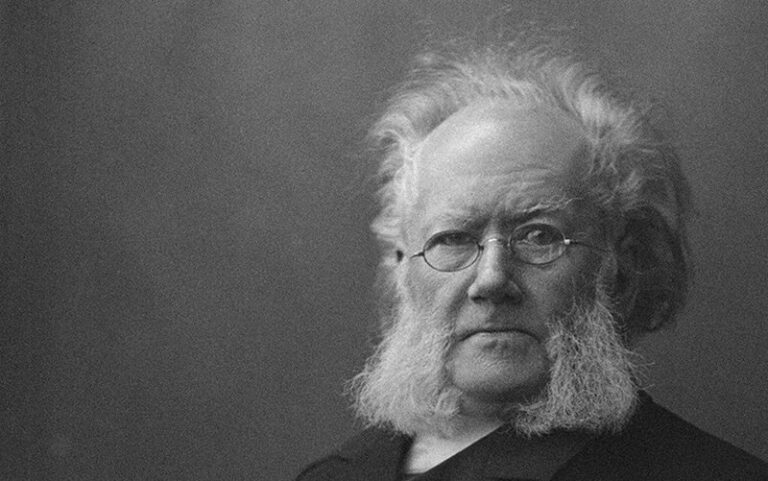 Henrik Johan Ibsen ( 20 March 1828 – 23 May 1906):
• Author James Joyce once wrote that Ibsen “has provoked more discussion and criticism that of any other living man.”
• Henrik Ibsen was a Norwegian playwright, theatre director, and poet.
• Ibsen is often referred to as “the father of realism”.
• He is one of the founders of Modernism in theatre.
• Ibsen is considered as the father of Modern Theatre.
• Ibsen is the most distinguished playwrights in the European tradition.
• He is the most frequently performed dramatist in the world after Shakespeare.
• His major works include Brand, Peer Gynt, An Enemy of the People, Emperor and Galilean, A Doll’s House, Hedda Gabler, Ghosts, The Wild Duck, When We Dead Awaken, Pillars of Society, The Lady from the Sea, Rosmersholm, The Master Builder, and John Gabriel Borkman.
• By the early 20th century A Doll’s House became the world’s most performed play.
• He is with critical eye and made inquiry into the conditions of life and issues of morality.
• He influenced other playwrights and novelists such as George Bernard Shaw, Oscar Wilde, Arthur Miller, James Joyce, Eugene O’Neill, and Miroslav Krleža.
• Ibsen was nominated for the Nobel Prize in Literature in 1902, 1903, and 1904.
• He was the father of Prime Minister Sigurd Ibsen.
• Ibsen wrote his plays in Danish and published by the Danish publisher Gyldendal.
• Danish was the common written language of Denmark and Norway during his lifetime.
• Ibsen was born to Knud Ibsen and Marichen Altenburg, into a well-to-do merchant family, in the small port town of Skien in Telemark, a city which was noted for shipping timber.
•  Ibsen’s sympathy with women would find expression with their portrayal in dramas such as A Doll’s House and Rosmersholm.
• His first play, the tragedy Catilina (1850), was published under the pseudonym “Brynjolf Bjarme”.
• He left Norway in 1864, spending the next twenty-seven years in Italy and Germany.
• In the first ten years after leaving Norway Ibsen wrote four plays.
• His play Peer Gynt made him famous in Italy.
• From Germany he dramatized his social and controversial plays such as The Pillars of Society followed by his remarkably famous, A Doll’s House (1879).
• Then he went to Rome again and wrote Ghosts (1881).
• A Doll’s House became scripture for the suffragette movement across the globe.
• In 1891, Henrik Ibsen went back to Norway, the first drama he wrote after his return was The Master Builder.
•  His later plays became the sort of tourist attraction in Christiania. In 1899, he wrote When We Dead Awaken which proved to be his last play.
•  In 1900, he suffered from a series of Strokes.
• On May 23, 1906 he passed away. 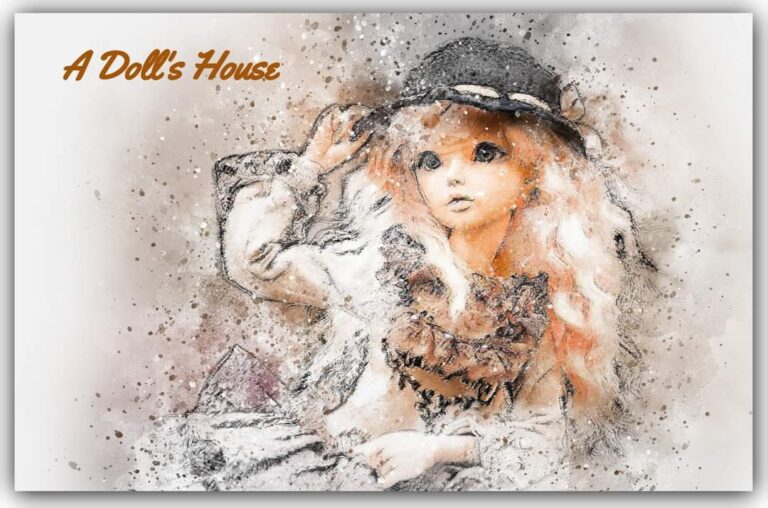 A Doll’s House introduction:
• A Doll’s House is a three-act play written by Norwegian writer Henrik Ibsen.
• A Doll’s House was published in Copenhagen, Denmark, where it premiered.
• Ibsen’s A Doll’s House (1879), written while Ibsen was in Rome and Amalfi, Italy, was conceived at a time of revolution in Europe.
• A Doll’s House was based on the life of Laura Kieler (maiden name Laura Smith Petersen), a good friend of Ibsen.
• The play opens at Christmas time.
• A Doll’s House tells the story of Nora, a housewife hides her financial problems from her husband Torvald. When Torvald learns of her deceit, he becomes angry.
• As a result Nora leaves him to become an independent woman.
• In order to protect her secret, Nora tries to defend Krogstad, one of Torvald’s employees.
• Torvald insists on firing the employee.
• He sends a letter to Torvald detailing Nora’s deceit.
• Torvald eventually reads the letter and gets angry with Nora.
• He dismisses the fact that she borrowed the money to save his life.
• After learning that the money does not need to be repaid, Torvald forgives Nora.
• But she cannot give forgiveness for his self-centeredness and leaves him and their children.
• Here in this play Ibsen sharply defined marital roles.
• Ibsen presented Nora as a prime example of the “new woman,” .
• Some criticized that although a woman might leave her husband, she would never leave her children.
• Nora leaves her family in order to establish a separate identity.
• Further, Ibsen himself declared that he was not writing solely about women but instead about issues of his society and about the need for individuals, both men and women.
• Torvald’s pride leads him to treat Nora like a possession instead of loving her as an equal.
• Nora matures from a childlike, dependent role into an independent woman who understands her own worth.
• A Doll’s House questions the traditional roles both men and women in 19th-century marriage. 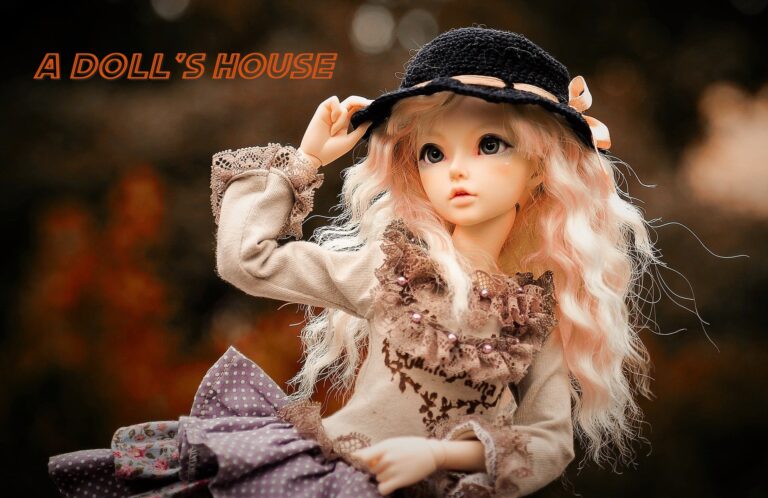 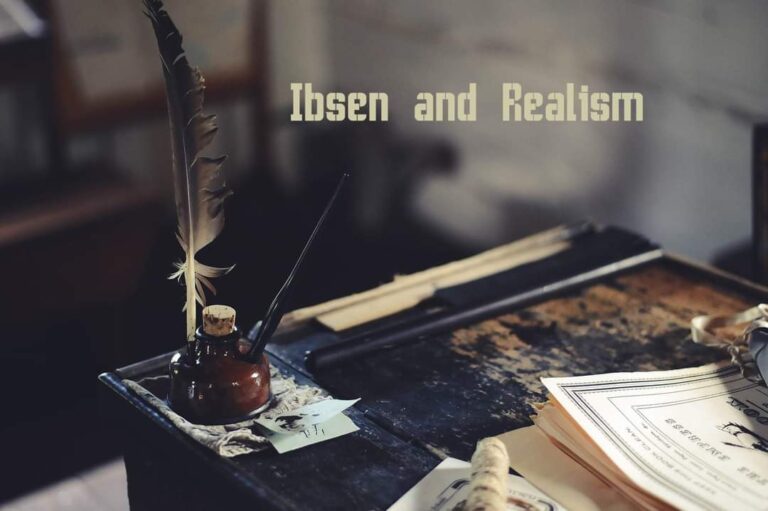 Ibsen and Realism:
• Henrik Johan Ibsen is often hailed as “the father of realism”.
• Ibsen shaped modern theatre by producing plays with social issues.
• In Norway, Henrik Ibsen is considered to be the father of modern realistic drama.
• Ibsen’s plays stands as an example of modern realism.
• His realistic plays with psychological and social problems won him recognition as the creator of modern drama.
• ‘Social Realism’ is the subgenre of ‘Realism’ in which socialist and Marxist ideas are set forth in literature.
• The issues addressed by Ibsen in his plays are: infidelity, sexual transmission of hereditary disease, euthanasia, women’s status, hypocrisy, deceit, boredom, falsehood, ostentation, war and business, marital problems and other issues of social life.
• Ibsen’s social realist plays are Pillars of Society(1877), A Doll’s House(1879), Ghosts(1881), An Enemy of the People(1882).
• He lived in an era that hailed morality and propriety, Ibsen brought forward the reality behind the facade and raised questions regarding the conflicts faced by the middle-class, the powerful, and the elites.
• Ibsen writes of his times, his contemporaries, and the social and economic concerns and problems of his day.
• Realism kept his writings contemporary and accessible till today. 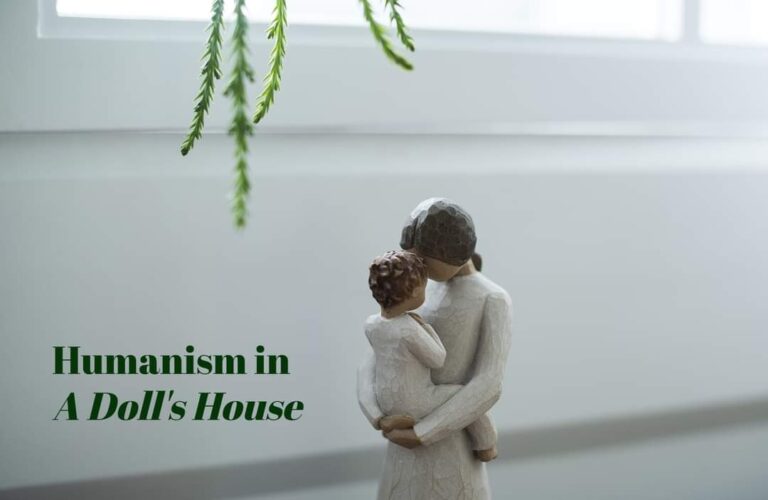 A Doll’s House and Humanism:
• Humanism is about the dignity and identity of a person regardless of gender.
• Ibsen has taken up the problem of marriage as an issue for this problem play.
• Ibsen’s A Doll’s House is often used to study in the context of feminism. Feminism is about the women’s rights related to social, economic and political perspective.
• Ibsen shows the audience the importance of treating all individuals with equal respect to their identities and freedom.
• Ibsen exposed problems inside the mask of the outwardly perfect relationship between a husband and wife.
• Nora has been less of a human and more of a doll, first for her father and then for her husband.
• Nora has little opportunity to develop a sense of self or to formulate her own views or express her own mind.
• The play specifically follows the journey of Nora for self-discovery and struggle against the oppression of her husband Torvald and the society that he represents.
• Feminists love this play for showing women’s struggles.
• Humanism is not just about males or just about females; it is about humans living as one.
• In short this play is an illustration of a humanist prospective of feminist issues.
• According to Ibsen, he wrote the story with a humanist eye.
• The drama is about the real and a burning social issue of a revolution that had become essential for the society to progress.
• By the end of the story, we are left with a clear message that Henrik Ibsen is a humanist, who is concerned with feminist issues.
• The drama is also very relevant to the situation of women in many parts of the world even today in the twenty-first century. 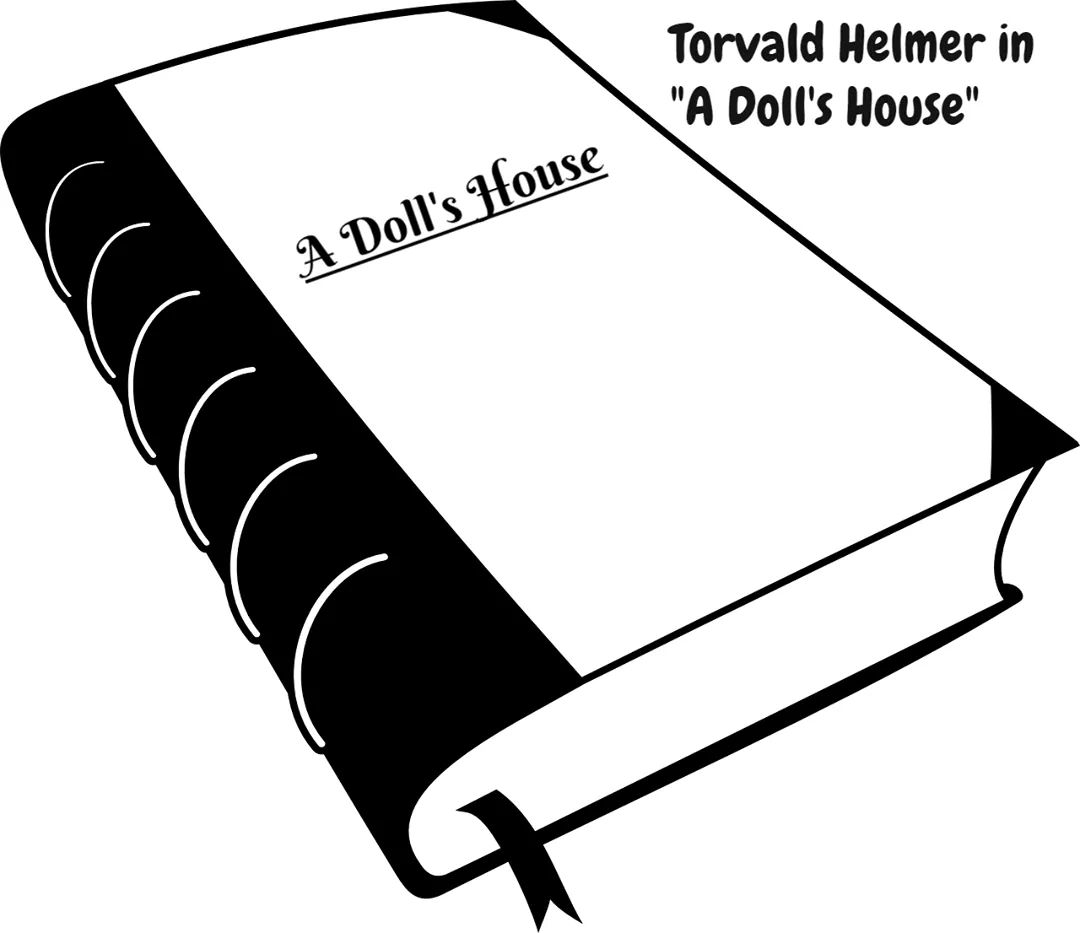 Torvald Helmer:
• Torvald Helmer is Nora’s husband in “A Doll’s House”.
• At the beginning of the play Helmer is seen as the loving husband, but as the play progresses our views about him have changed.
• He treats his wife as a doll throughout the play.
• He never considers a wife has equal importance in marriage.
• He is overly concerned about his status in society and that made him to keep away from emotions.
• He thinks that it is his duty to guide and protect his wife. He never considers his wife as an individual.
• Torvald is over conscious about other people’s view about him.
• He gives priority for social status rather than his family.
• As the play begins Torvald is a lawyer who got promoted as a manager.
• His best friend’s name is Dr. Rank who usually visits him.
• Torvald focuses on how he is being treated as a superior by the people like Nils Krogstad.
• Torvald’s “doll’s house” is torn apart at the end of the play.
• At the play’s end Nora abandons him, leaving behind her three young children.
• Helmer’s marriage is the typical example of 1800’s Europe.
• Several times Torwald criticizes the morality of other characters.
• When Torvald came to know Nora has committed forgery, he blames her crime on her father’s weak morals.
• It shows that he also criticizes Nora’s late father.
• He believes that debt is an ugly business.
• He is font of appearances, it seems rooted in vanity.
• He finds her beauty and her dancing abilities as a reflection of his status.
• He is the representative of middle-class husband.
• He is a solid character in A Doll’s House created by Ibsen. 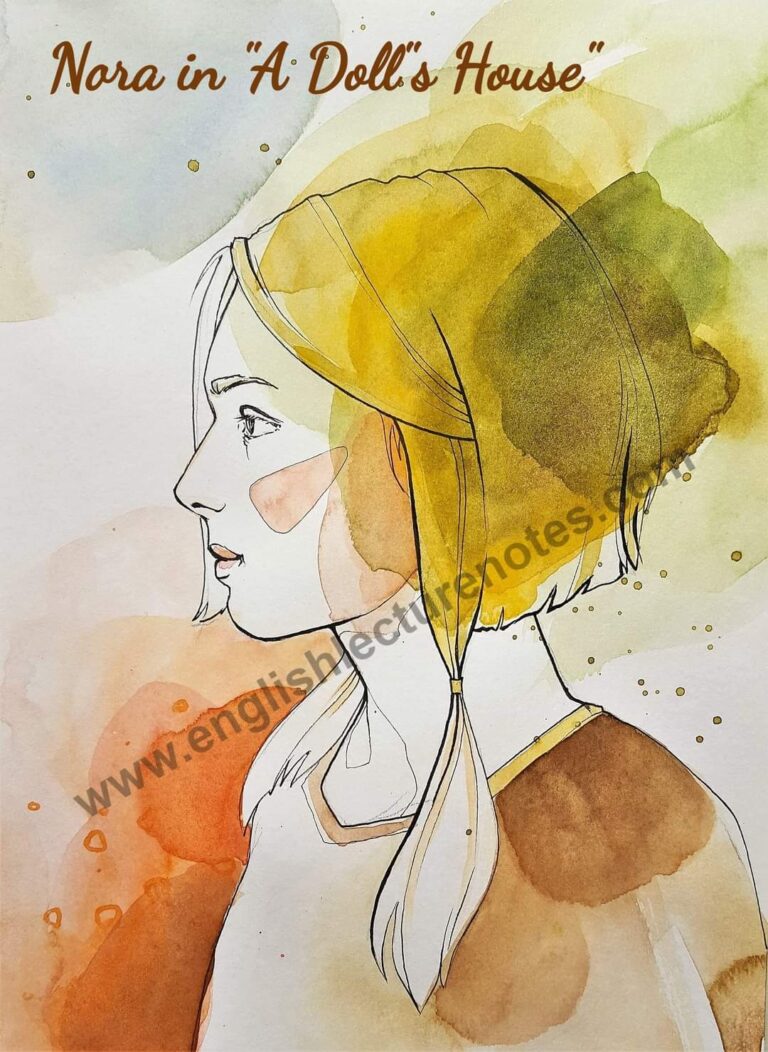 Nora:
• Nora is the central character in “A Doll’s House” on whom the play revolves around.
• Nora is wife to Torvald Helmer.
• At the beginning of the play “A Doll’s House”, Nora seems completely happy.
• As the play begins she appears preparing Christmas with full hope.
• Nora Helmer spends most of her life as a doll.
• Helmer treats her as a child.
• Before her marriage she was controlled by her father and after marriage by husband.
• For Helmer Nora is his personal property.
• She is squirrel and skylark for Helmer.
• She spends most of her life in a dream world.
• In most of her life she is frustrated by the fact that others believe she is a spendthrift.
• When Helmer finds her involvement in forgery he curses her.
• This was the first experience for Nora and she became frustrated.
• Nora’s mind filled with guilty of her husband’s pride.
• She tries at her best to solve the problems of her life.
• Last part of the play shows that Nora understands the fact that her understanding of herself was wrong.
• She came to the conclusion that she can no longer be happy in her marriage.
• A sudden courage and enlightenment originates in her life.
• She boldly refuses by saying: ”I am no longer prepared to accept what people say and what’s written in books.
• Nora represents the newly empowered woman who boldly escapes from the clutches of her old life.
• She puts life in between conventional morality and individual life of a human being in society.
• She is developing a character and she evolves into a strong individual at the end of the play.
Social media & sharing icons powered by UltimatelySocial